Prevention not reaction: Why investing in vaccination programs pays off

Vaccinations are considered one of the most effective measures to protect people from infectious diseases – no other health measure has saved as many people from death over the last 200 years. This article provides an overview of the history of vaccination, strategic approaches to vaccination motivation, and what impact vaccination has on the overall society. 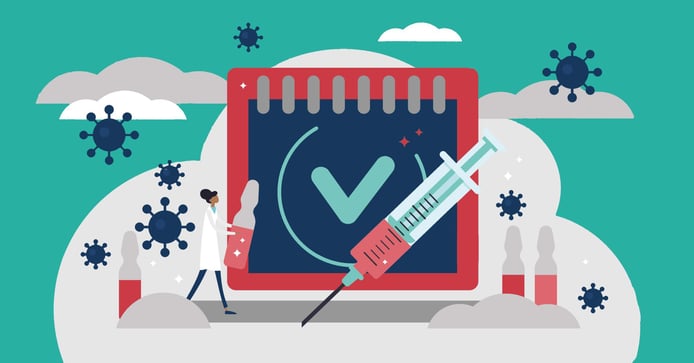 The history of vaccination

The history of vaccination begins with the fight against smallpox. The viral infection, which had been raging since the 600's A.D., had cost millions of lives over the centuries. As late as the 18th century, in particular babies and young children were still dying from the pustular rash. Attempts to immunize smallpox sufferers failed time and time again. The scientific breakthrough finally came in 1796, when the English country doctor Edward Jenner infected a boy with a related pathogen, the cowpox virus, through an incision in the upper arm. What is considered an unethical experiment from today's perspective, marked the birth of the first protective vaccination. An acquaintance of Jenner's, Richard Dunning, then coined the term vaccination – after the Latin word “vacca” for cow – for the method developed by Jenner at the turn of the century.

In the 20th century, experience with smallpox vaccination and the discovery of pathogens led to the development of further vaccines. First and foremost, among these were the scientists Louis Pasteur and Robert Koch. Pasteur is considered the inventor of the rabies vaccine. Together with Koch, he also discovered the pathogen that causes anthrax, against which they were also able to develop a vaccine. Other milestones in the history of vaccination include the discovery of vaccines against diphtheria and tetanus by Emil von Behring and Paul Ehrlich.

These groundbreaking developments mean that vaccinations are now among the most successful health measures of all time. The last cases of smallpox were reported in the mid-1970’s, and in 1979 the WHO declared the disease eradicated. Today, vaccinations protect against many diseases and are estimated to save three million lives worldwide each year.

Although vaccination is one of the most successful health interventions, various reasons such as skepticism, fear, or lack of information can make people reluctant to get vaccinated. Therefore, there are different approaches to improve vaccination motivation – from alternative forms of application to humanoid robots.

In a 2018 survey by the German Federal Center for Health Education (BZgA), as many as 6 percent of participants said they were afraid of injections. This fear could be circumvented with other forms of application. In fact, some vaccinations already do not require a needle. For example, a vaccination spray against influenza has been available for several years, and other forms of application such as microneedle patches are being tested. Studies have shown that the vaccination rate in groups who were offered the alternative form of administration was higher than with conventional administration.

To counteract fear of vaccination in children, the use of humanoid robots that distract children from vaccination is being studied. Studies show that this can reduce stress as well as pain.

Motivational interviewing (MI) can be a successful intervention when individuals refuse vaccination due to misconceptions or lack of information. In MI, patients' concerns and ambivalences are addressed and existing worries are reduced through education. In this way, individuals can be motivated intrinsically.

Among other things, nudging is emerging as a promising measure. Nudging is a technique that influences decision-making architecture to nudge people's behavior in a particular direction. In the context of vaccination, several studies have shown that providing more information, for example, pointing out vulnerable groups or the limited availability of vaccines, can increase vaccination rates.

In some cases, lack of willingness to be vaccinated is not necessarily related to skepticism, fear, or a lack of information. Certain physical conditions can also make it difficult to visit a doctor.  As a result, some German health insurance companies offer that some people can get vaccinated at home – for instance when being unable to visit a doctor's office on their own due to a degree of care or an inability to walk. This is another way of reducing the barrier to getting vaccinated and helping to increase vaccination rates.

The European Union invests about 8.3 percent of gross domestic product in health spending, of which only 3 percent is in prevention. Despite their significant role in disease prevention and the fact that vaccination is considered one of the most effective and often even cost-saving primary prevention interventions, vaccination programs account for only a small proportion of this 3 percent.

In Germany, the STIKO recommends which vaccinations are of high value for the health protection of individuals and the general public in order to prevent communicable diseases. It bases its recommendations largely on the results of so-called medical benefit-risk assessments. Furthermore, in certain cases, the standard operating procedure (SOP) additionally provides for epidemiological methodological models (EM) and / or health economic evaluations (GE) to model future effects beyond the medically based assessment by the benefit-risk assessment and to determine the most efficient vaccination strategy. Such methodological models and health economic evaluations, while not yet the standard approach of the RKI in Germany, routinely inform the recommendations of most vaccination committees in Europe. This has led to a lively discussion about the methodology of these epidemiological-methodological models and health economic evaluations.

In addition to the fact that vaccinations have a positive impact on individual and societal health through immunity and reduced contagion, economic growth is also affected through various mechanisms. For example, improved health due to vaccinations results in fewer sick days, which can be translated and monetized into paid as well as unpaid work. Proposals on the benefit dimensions to be taken into account thus go beyond herd immunity. They call for consideration of, for example, productivity effects of affected individuals and potential caregivers, social insurance, economic growth, or even aspects of social justice. They argue that only if the corresponding benefit dimensions are taken into account the actual value of vaccinations can be determined.

In the study “Social Impact of Innovative Medicines”, among other things, you will gain insights into current analytical methods used in HTAs as well as the Social Impact approach, in which the value of medical innovations is redefined:

What is our health worth? In public debates, a misconception tends to prevail that a high-quality healthcare system is expensive. This leads to a...

From traditional reporting to the Value of Impacts: Novartis' Impact Valuation

Awareness is rising that traditional reporting fails to demonstrate what matters most to stakeholders: a company's social, environmental, and...

My vision is a world where health is seen as the greatest investment.