What is our health worth? In public debates, a misconception tends to prevail that a high-quality healthcare system is expensive. This leads to a focus on price, whereas the effects on society, the so-called “Social Impact”, are undervalued. In Social Impact studies, WifOR thus aims to shift the discussion from costs to the socioeconomic value for society. In this article, you will learn more about the socioeconomic perspective, how WifOR calculates the Social Impact of a medical innovation, and which insights the model provides. 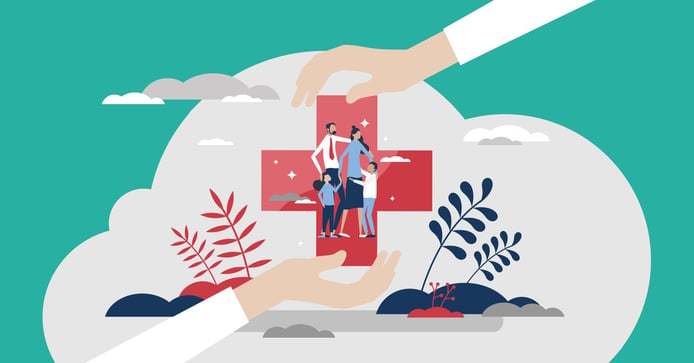 Itchy eyes, sneezing, and sinus pressure: Allergic Rhinitis (AR), caused by specific pollen antigens, is one of the most common chronic allergic respiratory diseases worldwide. In 2019, 38.8 percent of the entire Japanese population was affected by AR caused by Japanese cedar pollen. Inadequately controlled symptoms not only limit the quality of life of those affected but also lead to major economic losses. In an analysis of 17.2 million patients suffering severe forms of Japanese Cedar Pollinosis (JCP), WifOR identified a productivity loss of 26.1 billion US Dollars (USD) annually – an average of USD 1,522 per patient.

Socioeconomic Burden of a disease

Through the Social Impact of medical innovations approach, WifOR measures the benefit from innovations for society in terms of health and productivity effects. The Social Impact quantifies and monetizes the productivity losses of paid and unpaid work that might be avoided due to a medical innovation (such as a drug). For example, an Allergic Rhinitis medication can enable chronically ill patients to continue to work and pursue their daily activities.

For instance, the results of a study recently published by WifOR show that the humanized monoclonal anti-immunoglobulin E (IgE) antibody Omalizumab can significantly lower the corresponding disease burden of Japanese Cedar Pollinosis (JCP). Omalizumab has the potential to reduce paid and unpaid work productivity losses for approximately 37 million hours in an assumed population of 1.5 million patients with severe forms of Japanese cedar pollinosis (JCP). For one patient, this translates into 24.6 hours without any symptoms during the severe JCP symptom period of three weeks. This corresponds to 22 million paid and 15 million unpaid working hours per year and a potentially avoided productivity loss of USD 728.3 million – USD 490 per patient.

How to measure the Social Impact of medical innovations

To measure the Social Impact of a medical innovation, WifOR first quantifies the degree to which a patient is burdened by a disease and to what extent the innovation reduces the impairment. To this end, indicators such as patient-reported outcomes (PRO) from Work Productivity and Activity Impairment (WPAI) questionnaires are used.

In a second step, WifOR calculates the resulting productivity gains from both paid and unpaid work. These values are adjusted to the average age and gender distribution of the patient population.

In a final step, WifOR monetizes the avoided time loss. Based on the premise that the ability to perform paid and unpaid work is an indicator of a society's welfare, the effects caused by the medical innovation are interpreted as a welfare gain. WifOR monetizes this welfare gain as Gross Value Added (GVA) per hour.

The Socioeconomic benefit due to medical innovation:

New perspectives on innovation in the context of pharmaceutical products

The Social Impact approach measures avoided productivity losses in paid and unpaid work, which can help broaden different stakeholders’ perspectives on the value of medical innovations. Social Impact analyses show that investments in medicines create value that can be measured in economic terms. Thereby, they can build an understanding why it is necessary to consider not only therapeutic benefits of medical innovations but also their value to the economy and general welfare. Numerous WifOR studies demonstrate that investments in health pay off as they drive growth, employment, innovation, and ultimately a healthier population.

Download the paper “Social Impact of innovative medicines” here to gain further insights into current analytical methods used in Health Technology Assessments (HTAs), the Social Impact approach as well as a case study on the example of Aimovig®:

From traditional reporting to the Value of Impacts: Novartis' Impact Valuation

Awareness is rising that traditional reporting fails to demonstrate what matters most to stakeholders: a company's social, environmental, and...

Prevention, not reaction: Why investing in vaccination programs pays off

Vaccinations are considered one of the most effective measures to protect people from infectious diseases – no other health measure has saved as many...